Atlanta, Food, Restaurant, tales of the traveling hat, the hat

So here’s the thing about my trip to Atlanta…

The most I saw of it was this: 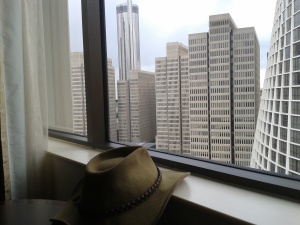 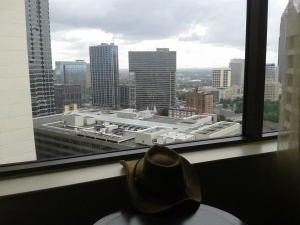 Er, yeah, I didn’t go anywhere.  I did not see the sights and the few times I traveled to restaurants outside my hotel I took the sky bridges and they pretty much erased the need for walking around the city.  There was also the fact that I was alone most of the time, which is not an ideal travel state when in a strange town while simultaneously being short and female with a funny hat.  The few times I wasn’t alone something would come up and no sights were seen.

But I did have some culinary experiences I can share with you!  Learn from my triumphs and devastating mistakes, people.

Seeing as I spent the majority of my time in this hotel it’s no surprise that I got familiar with all their restaurants.

Trader Vic’s is delicious and great fun.  Be sure to order a scorpion bowl.  The waitstaff was all very friendly and accommodating both times I went down there.  They really want you to have a good time.  So if you like Polynesian food and atmosphere this is the perfect place to spend an evening.

Nikolai’s Roof was also a very positive experience.  The restaurant is at the top of the hotel so even though some yelp reviewers apparently thought the decor too antiquated for them, I don’t see how you could complain about the amazing view.  When I was up there we were able to watch a storm roll in, surround us and just pour rain.  It was stunning.  At the time Nikolai’s also offered a reasonable prixe fixed menu with three courses but I don’t know if that’s a regular feature.  If it isn’t then you’re likely in for an expensive night.  However, considering how delicious our food was, I don’t doubt it would be a fair price.  For fans of French and Russian cuisine, this is the way to go.

The last restaurant in the Hilton I have to mention is Southern Elements on the ground floor.  I wasn’t expecting much but I was blown away by the chicken pot pie.  It was ludicrously delicious.  Seriously, just pop over there and have the chicken pot pie.

If you’re in the Peachtree Center food court and are looking for a cheap meal, I would head for Gibney’s.  It’s not the most spectacular food I’ve ever had but it’s certainly not bad and for the price I was more than satisfied.  Very good for a quick, convenient lunch.

This place reminded me a lot of BJ‘s here in California.  The menu is also similar but with a Southern twist.  The prices are pretty good and the food savory.  Although the breading on the fried chicken wasn’t to my taste, that’s more of a personal preference than a criticism.  The meat itself was mouthwatering.  By the by, if you like Shiraz you should definitely go sample their McWilliams.  It’s probably the best I’ve ever had.

This place is tied with Nikolai’s for most expensive but if you’re planning on spending a lot of money on one meal while you’re in Atlanta, I’d definitely choose Aria.  The restaurant is lovely, quiet and very classy.  It felt like an upscale home more than it did a restaurant.  The waitstaff was fabulous here, attentive and eager to please.  Everything I tasted was divine.  The oyster dish in particular was inspired.  I’d never had fried oysters before and now I don’t know what was taking me so long.  Looking for a decadent night on the town?  This is the spot for you.

And now, finally, the disaster restaurant.  Oh dearie me.

First of all I’d like to say that it is entirely possible this place was experiencing a bad night when I went there for dinner.  Any of the restaurants I enjoyed so much in Atlanta could completely underwhelm someone else while White Oak would delight them to no end.

That said, allow me to share my tale of woe turned to frustration and then slight hysteria.

The first sign that this was not going to be a great dining experience was when my cocktail made me want to be physically ill.  I’ve had drinks that I didn’t like much but my mindset is, “This is a learning experience.  I will finish this drink and remember that I don’t like this combination in the future.”  I intended to do that with the Blood & Sand I ordered, a drink I’d been dying to try for a while, but I simply could not bear it.  It felt like I was swirling rancid dirt in my mouth.  I do not know what on earth about this drink combination made it taste that way but it was revolting.  I traded it for a Bramble and was quite a bit happier.  Still, the Bramble was only ‘meh’.  I was simply too relieved not to be drinking the Blood & Sand anymore to care.

The group ordered their food and bad sign number two came rolling over.  Absolutely everyone’s dish was cold.  Everyone except me sent theirs back but I decided to persevere with my lamb because it was at least slightly above room temperature so if I ate quickly I would be able to get it down before it hit stone cold levels.  Under most circumstances if I think something is cold I’ll send it back.  That night I happened to be starving and didn’t want my lamb to be overcooked.  The other person who ordered lamb and sent it back to be warmed did get it back overcooked so I don’t necessarily regret my decision.

Sadly I was still hungry.

Imagine my delight when the manager came over to offer us free desserts to make up for our experience.  This mostly happened because the woman who ordered the fish got it served to her cold twice.  Awkward.  The awkward levels increased even more when the dessert she ordered arrived cold, too.

Now, with regard to flavors, I will say that everything did taste quite good.  With one exception.  If you ever do decide to go to this place I would like to warn you away from the warm chocolate pudding.  I’m sure you can guess the actual temperature it was but it was also pretty unappetizing.  It arrived in a tiny jar, which was problematic as the woman I was sharing it with had expressed our intentions to split it to the waiter and he didn’t bother to warn us that the portion was miniscule.  Visually it was deeply uninspired and the flavor did not make up for it.

It annoys me when chocolate desserts go wrong.  Come on, people, it’s chocolate!  You have to really put in some effort to make it unappealing.

Unless you have a chocolate allergy or are one of the few who don’t like chocolate at all.  Probably all chocolate desserts look like this pudding thing did to you guys.

To cap off this three hours of waiting for food only to have it arrive cold, they managed to muck up the checks as well.  At that point all of us were laughing because it was either that or set people on fire so they could learn a valuable lesson about what hot food should feel like.

At long, long last we escaped the White Oak Kitchen, happy that we had made it out before any of our party died of old age.

So yeah, not a great time.

Well… okay, it became a great time despite itself because of the company.  With the way we were laughing you’d never have known how miserable our experience was.

And that’s my Atlanta post!  It basically evolved into a restaurant guide.  I feel bad that I didn’t have more wacky adventures out in the city to share.

Oh!  On my way to the liquor store I saw a woman passed out drunk in a parking lot.  Does that count as a wacky adventure?

Yeah, I won’t hold my breath waiting for the Atlanta tourism board to call with a job offer.

Well hey, their airport had pretty decent food and I don’t think you can ask for more than a meal in a terminal that doesn’t make you regret knowing that food exists.

Two thumbs up for Georgia!